After graduating from Nauset Regional High School, Kareem Sanjaghi knew that Cape Cod Community College was his first stop on a higher educational journey. Having heard about the great professors and classes first-hand from friends and family, Kareem enrolled at 4Cs after high school, balancing his education during the day-time with a passion for playing the drums, which he did at night. 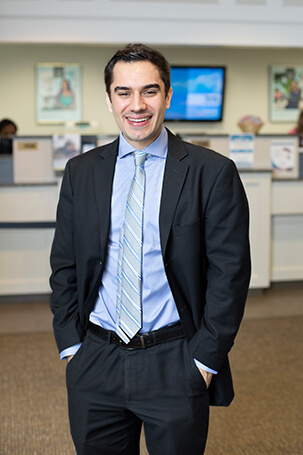 Having heard about the great professors and classes first-hand from friends and family, Kareem enrolled at 4Cs after high school.

It wasn’t just the classes that hooked Kareem; it was the connection to his classmates and faculty. He quickly became immersed in campus life and found a strong connection with the Economics Club.

The Economics Club, and Professor Virander “VG” Gautem, helped push Kareem to the next level. He utilized the College’s Transfer program and moved on to Boston College, where he obtained a Bachelor of Arts in Economics in 2011.

After earning his degrees, Kareem returned to the Cape to begin a banking career, joining Cape Cod 5 where he now works as a Mortgage Loan Officer. In addition to his career in residential lending and financial advising, Kareem serves on Cape Cod 5’s Culture and Art Advisory Committee and continues to play music all over Cape Cod.