Successful co-owner of Scargo Café and strong supporter of the Cape non-profit community, David Troutman ’82, started classes at 4Cs a year after graduating from Barnstable High School. He was working full time, wanted to stay local, and needed an affordable option. He soon discovered that the quality of the teaching was tremendous. 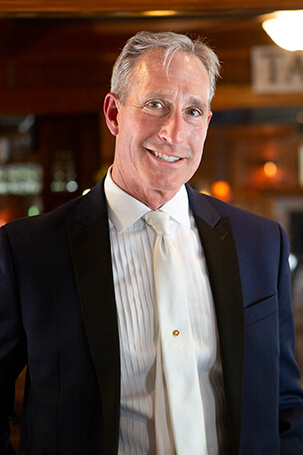 Even with his full-time job, David enjoyed participating in college activities such as Student Senate, Student Life, theater, and the Mainsheet.

“I was getting the same quality education in my English class as a Harvard student.”

He graduated in 1982 with an Associate of Arts in Communications. In 1987, Troutman and his brother, Peter, opened Scargo Café in Dennis. Years later, he fulfilled his personal goal and graduated from Suffolk University in 2006 with a BA degree in Communications.

Between taking classes, attending events and meetings, and mentoring, the College continues to play an important role in David’s life. He considers 4Cs a great community resource and a smart choice for anyone looking for a superior education at an affordable cost.

David is deeply involved with a number of community organizations. His involvement has become his passion. He is a founding member of Calmer Choice, a mentor for the YMCA Achievers program, on the Executive Board of the Cape Cod Chamber of Commerce, a graduate of the Community Leadership Institute, a member of Philanthropy Partners of the Cape and Islands, and a supporter of WE CAN, to name just a few.