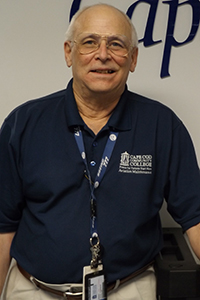 From the time of a small child growing up in Grand Rapids, MI, seeing off and picking up his father (Kent County Airport) from his business trips to Chicago Mr. Townsend became fascinated with airplanes.

At that time he was flying aboard four engine prop planes of 1950’s vintage. Jim always enjoyed working with his hands and in 1990, after spending many years in scientific research (M.I.T.) and U.S. – China business (Washington, D.C./Beijing, China) he had a chance to attend East Coast Aero Tech (ECAT) and learn aircraft mechanics.

From ECAT, Mr. Townsend went on to work at Pratt & Whitney Aircraft, and later started an ultralight aircraft business where he built his first two-seat UL trainer.

Mr. Townsend has a very diverse educational background including the following credentials:

In September 2001, Jim became an AMT instructor at ECAT, and has been teaching aviation maintenance technology in Part 147 schools to the present time here at 4C’s AMT Program