In a few weeks, Grace Jensen will walk the stage as a new graduate from Cape Cod Community College. Before her big moment at the Cape Cod Melody Tent, Grace walked a different stage, earning congratulations and a handshake from Governor Charlie Baker at the Massachusetts State House as the College’s 2019 “29 Who Shine” honoree. 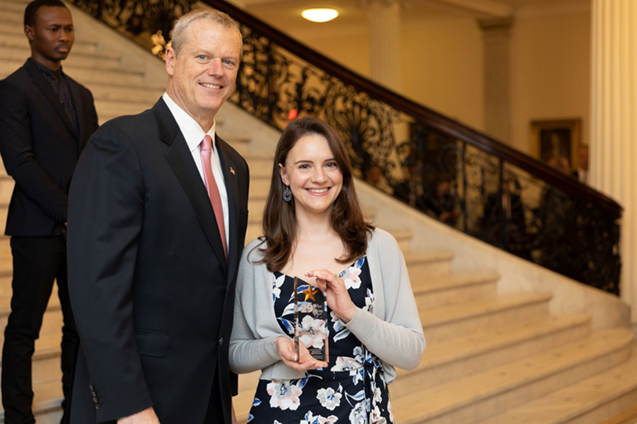 The “29 Who Shine” awards are presented to one student from each of the Commonwealth’s 29 public campuses, including the 15 community colleges, nine state universities, and five University of Massachusetts campuses. The awards are given to students who succeed not only in their academic pursuits, but in their efforts to strengthen their communities. Grace was nominated by her faculty mentor, 4Cs History professor Kate Martin, for her outstanding achievements in-and-out of the classroom.

A 2008 graduate of Mashpee High School and a member of the Mashpee Wampanoag Tribe, Grace has travelled the country to pursue her passion for conservation. In 2017, after a break from her college education, she was accepted into the Bureau of Indian Affairs Water Resource Technician Training program. Shortly after her time there, she began studying hydrology training at the University of Arizona, completing more than 200 hours with the University’s hydrology department and federal agencies that include the United States Geological Survey. Following that training, Grace travelled to Virginia to serve an AmeriCorps internship with the United States Fish and Wildlife Service at the Great Dismal Swamp National Wildlife Refuge. After her internship ended, she used her AmeriCorps education award to pay for classes at Cape Cod Community College, where she is graduating with a degree in General Studies with a concentration in the sciences.

While her dedication to protecting the world around her has taken her across the country, her future is here in the Cape and Islands region. This Fall, Grace will be continuing her education at the Massachusetts Maritime Academy, where she has been accepted into the Marine Science, Safety, and Environmental Protection program.

“Growing up, I always knew that I wanted to work outside and explore our natural world,” Grace said. “Born and raised here, Cape Cod will always be my home. My close ties to this beautiful place give me reason to do whatever I can to protect it and its residents.”

The 29 public college and university campuses in the Commonwealth selected the honorees for the “29 Who Shine” awards based on criteria established by the Department of Higher Education.